Alicia’s Adventures Part 4 – Peru in all its Glory 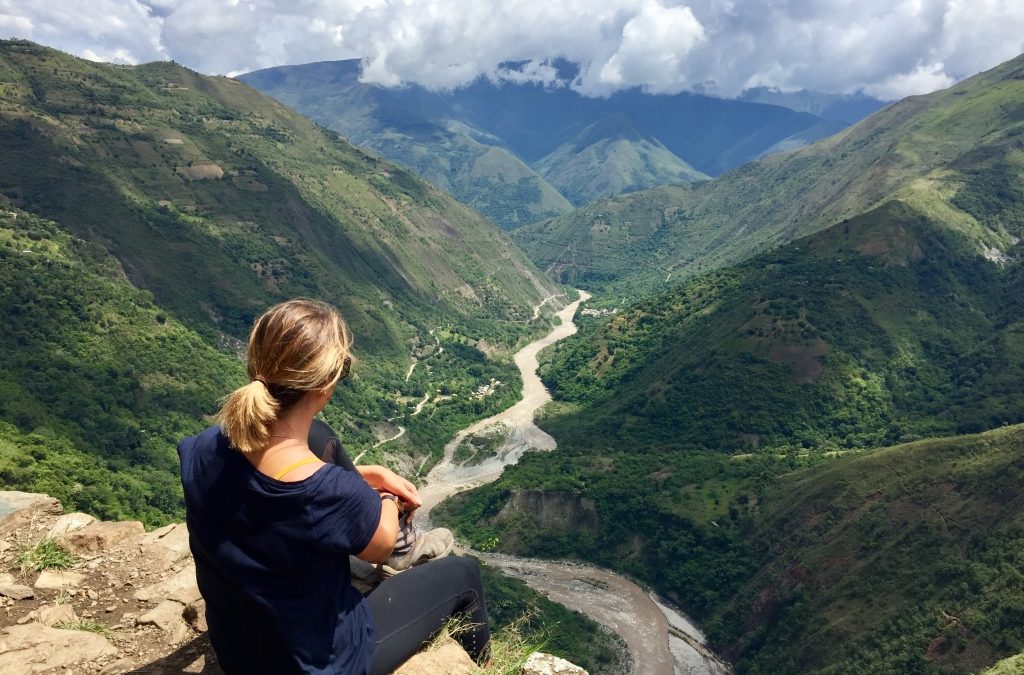 In the early hours of the morning Tim and I arrived in Cusco, managed to check-in to Loki Hostel (renowned for being a “party hostel”) and took a much-needed nap. Tim had already been to Cusco, so I went on the walking tour alone and fell in love with the little touristy town. The tour ended at a cacao museum where I found out they ran chocolate-making classes!

We booked in for that same afternoon, where we learnt how chocolate is made, everything from bean to stomach! We learnt how to make all sorts of hot chocolate (including pisco hot chocolate!) and then we made our own chocolate with various ingredients and mould shapes, which we of course took with us! That’s my kind of afternoon!

We managed to book a hike to Rainbow Mountain the next day, which started with a 3am bus pick-up, so I wanted an early night to get a good sleep. Turns out it’s impossible when you’re staying at Loki and even more so when situated in a dorm above the bar… it felt like we were trying to sleep in the middle of the dance floor. So, after an unsuccessful, restless night’s sleep we woke at 2:30am and were on the bus by 3am to head 3 hours towards Rainbow Mountain.

After a delicious and huge breakfast, including a quinoa and cinnamon traditional soup which was delicious, we made it to the base of Rainbow Mountain. The base is situated at approximately 4,300m above sea level and the start of our 3-hour trek. Along the way, as altitude kicked in and the weather continually switched from hot to freezing and snowing, the hike became increasingly difficult. I personally struggled and at one point, was close to throwing up and needed to sit down for a few minutes. Each step became harder and I could really feel the lack of oxygen in not only my lungs, but every muscle. I couldn’t expand my chest properly and it was something like I’d never felt before; it was a strange feeling, and certainly not an enjoyable one. I kept wanting to assure everyone that at sea level I was sure I was fit!

View during our hike to reach Rainbow Mountain

With the help of my travel buddies and the guide, I continued on and soon enough we had reached the (recently) famous Rainbow Mountain, at 5,200m above sea level, a similar altitude to Everest Base Camp. The views were magnificent! It is named Rainbow Mountain because it looks exactly like that, with different colours streaked through the mountain sides, all due to the mineral composition in the Earth. The view was made more spectacular with the snow; a rare occurrence, making for a much cooler photo (although also much colder on your hands while trying to take photos) because it is so uncommon to experience. Suffice to say, I definitely preferred the hike back down the mountain! It was another 3 hours back on the bus, with a pit stop for a 4-course meal on the way. I have to note that this tour was all-inclusive and cost only $27AUD!! I was definitely not in Australia anymore!!

We returned to the hostel and had a few celebratory drinks, which I now know was a poorly made decision. Not only did I wake up to feeling lethargic and with a bit of a headache (which at the time I put down to a slight hangover), but I also had a bit of gastro… not a good combination, especially on Australia Day and my hostel was starting the Triple J Hottest 100, “Aussie BBQ” and drinking games at midday. In true blue spirit, of course I had to join in. It was a great day and night, but long story short, I paid for it the following day.

Still having gastro, adding in dehydration and lack of sleep, mixed with what I found out (too late) was altitude sickness, resulted in me feeling well beyond average. I cannot explain to you how terrible I felt, but I managed to somehow get out of bed and make my wat down the hill to Cusco centre. I got there, but was in no form to make it back up to my hostel so Tim had to put me in a taxi. I found myself not being able to speak more than about 3 words at a time without gasping for oxygen. It was the most horrible experience and I spent the whole day in pain, stuck in bed and feeling as if I were about to pass out or die. Thankfully, Tim arranged to move me to a dorm far from the bar so I could sleep well that night, as well as helping me pack my things to set off on my early morning departure for the Inca Jungle Trek to Machu Picchu, which I was close to cancelling because of my state.

I’m so glad I woke up the next day feeling about 80% better! It was day 1 of a 4-day adventure trek to finish at one of the seven manmade Wonders of the World, and that first day began with downhill mountain biking. After freezing our fingers off in poorly insulated gloves, while riding through 30km of hail and rain, we finished in our jungle accommodation for another generous and delicious lunch. Peru was certainly delivering on not only the value of meals, but also the recently world-acclaimed quality of the meals. After lunch was white water rafting, which was hilariously fun, and included body rafting and some games (which, because of my competitive streak, in a group of 5 guys and myself, I managed to tie with one of the Americans!) Being the only girl came with other perks; my very own room and a double bed! After 6 weeks of bunk beds and sharing small rooms with between 6 and 11 other people, this was LUXURY!! 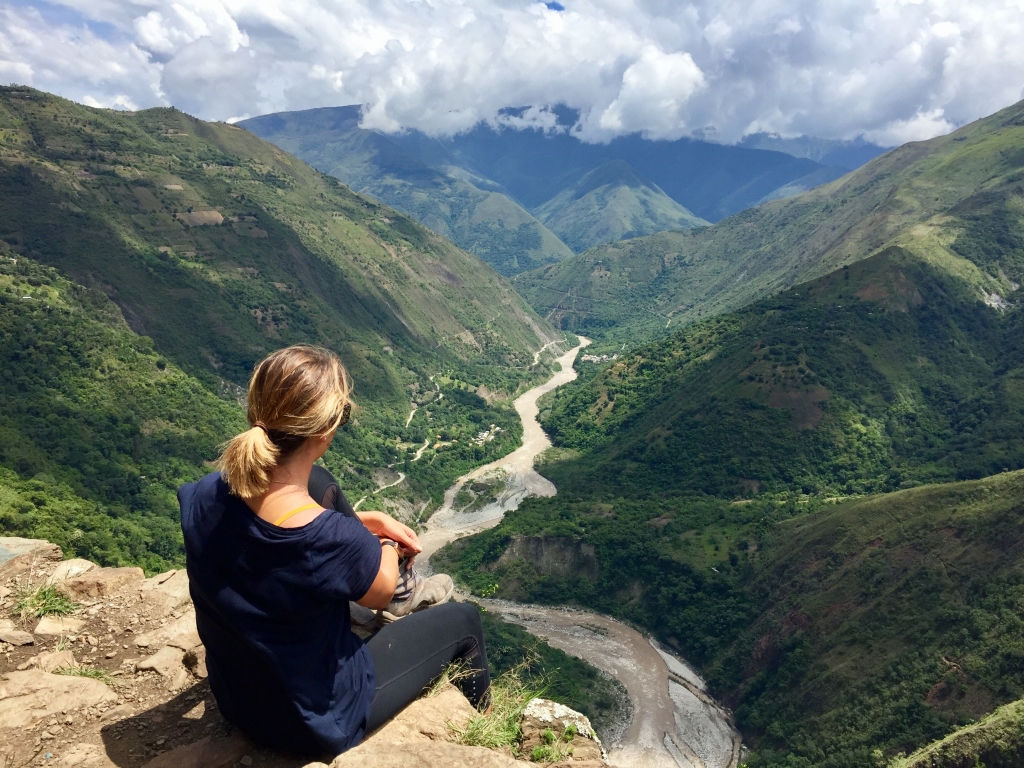 Waking up in the jungle to the sounds of nature on Day 2 was perfection. That day we set off for our 17km trek along one of the traditional Inca Trails. The views were magnificent and the surrounding nature was spectacular to witness. Along the way, we learnt about the plants, foods, cultures and traditions of the native people. We were lucky enough to have a guide who was born, raised and still lived locally, who knew all about traditional culture and was part Quechuan. He was super passionate about everything sharing and wanted to feed us as much information as possible and give us the best experience we could have; he definitely succeeded! We tried various fruits, seeds, nuts and drinks along the way, and got our faces traditionally painted. After a long day of hiking, we bathed in some thermal hot springs in the middle of the jungle; what a great day!

Day 3 was all about getting to Agua Calientes; the town that sits below Machu Picchu. Once there, we had free time to explore and relax, plan our attack for Machu Picchu the following day, and enjoy our last dinner with our guide, Samuel.

At 5am we had our head torches on, backpack packed, and enthusiasm in full force, ready (with hundreds of others) for the gates to open to get to Machu Picchu. Luckily, all 6 in my group (I like to include myself in this!) were pretty fit and healthy, so we managed to take on the thousands of stairs at altitude in 45 minutes, which meant we overtook people and ended up right near the front of the line to enter the historical site when it opened. And when it did open, and we entered… WOW. Absolutely breathtaking. The photos do not do it justice, and no one can explain how amazing of a sight it really is. It is of epic proportions, and I literally just kept repeating about how incredible it was. Our guide met us in there and we managed to get photos without huge crowds in the background. He started to guide us through the ruins and tell us all about the history of Machu Picchu. The idea of how the people managed to transport all of those huge boulders, rocks, vegetation and more up to that site, is just mind-blowing; I still can’t fathom it. We said goodbye to Samuel and entered Huaynu Picchu; another peak consisting of thousands of stairs again, overlooking Machu Picchu. What an incredible view!

Traveller’s tip #1: I would 110% recommend booking entry to Huaynu Picchu as well as Machu Picchu. Huaynu Picchu has a maximum of 400 people enter per day, in 2 time slots, so you need to pre-book the tickets. It costs about $15USD and the view is well beyond worth the price and physical exhaustion.

After taking in the incredible view of Machu Picchu from this angle, we descended, walked through the ruins and continued up the opposite side, towards the Sun Gate; where the traditional Inca Trails meet Machu Picchu. We saw Machu Picchu from another angle, and no matter how many angles you see it from, it does not cease to amaze and impress. Words can honestly not describe the magnitude of its brilliance, and we were lucky enough to have scored a completely bright, sunny and clear day.

Traveller’s tip #2: It’s cold when you start the 5am hike but you quickly become very hot due to the physically demanding hike. Once you’re up there it can be a little chilly with the wind, but then it will become toasty once the skies clear and the sun beams directly on you. Ensure you pack for both cold and hot weather!

Traveller’s tip #3: Our tour included the return train ride from Agua Calientes towards Cusco, so we could stay in the ruins for as long as we wanted. We stayed there until around 3pm, whereas those who didn’t have the train ticket, had a long bus ride back and therefore had to leave hours earlier. I would highly recommend getting the train, not only for comfort after a long, hard day, but also so that you can get to Huaynu Picchu, the Sun Gate, and have time to really enjoy and appreciate Machu Picchu for the awesomeness that it is.

Lima was my next destination, and I was left on a plane the next afternoon. But before doing that, I needed to explore a little more, enjoy the town of Cusco, and visit a Cuyeria for lunch with the boys from my tour. We took a taxi to a locally-recommended Cuyeria on the outskirts of town and sat down to order one of two meal choices; Fried guinea pig or oven-roasted guinea pig. The boys all chose fried and only half the guinea pig. I went all out (when in Rome!) and got the entire roasted guinea pig, and it’s safe to say I did not regret it! As horrified as the boys were in me eating this entire guinea pig that was served as is; claws, teeth, face and all; I actually found it delicious and I ate every last bit of it! And yes, it tastes like chicken. It is a Peruvian delicacy and Samuel had told us that most families will have tens to hundreds of guinea pigs alive in the kitchen at most times, and then when it’s a special occasion, they’ll cook them. A completely strange idea to Westerners, but something I had to try.

Next on Alicia’s Adventures:

A trip to the Peruvian capital, too many overnight buses to count, and entering Ecuador.